It's been a while, I've been working, studying and snowboarding. Last one has been a lot of fun and the other 2... meh.

But let's get back to the business. I've been actually able to play one game with my "kind of" Screamerstar at local gaming store Poromagias War Head Fight club!

I played with my "Screamerstar" that is a little bit restricted because of the models available:

First battle against White Scars, went second and more or less forgot about scout moves, hit&run etc. Lost all but 2 of my screamers and bunch of other stuff on turn 1. Rest of the game was uphill struggle for me and we decided to call it a game on turn 6 when I had 1 unit of horrors and DP of tzeentch left on table against his 2 squads of bikes, centurions, scouts and 2 storm talons.

Althought the game was disaster I actually some valuable lessons.

Lesson #1 Know your enemy! - If I had remembered the scout move I could have prevented the loss of my Screamers by deploying differently. I need to study the usual tournament lists suchs as Seer Council, SM Bikes beast packs etc. and their special rules to prevent such a rookie mistake as my deployment in this game as I will end up against them sooner or later.

Lesson#2 Play, play, play! - I really need to play more games to have good routine and to get to know strenghts and weaknesses of my army. Strong routine will help me to better think through tactics even against unknown lists & armies.

Tomorrow is another War Head Fight club night and I've made some changes to my lists. This one is more like "flying circus" + stuff.

I will try to make a small battle report on tomorrows game unless it is a total disaster!

The first real update: My new army project (one of the many I have started).

So I am getting little bit bored of my BM (thats BLACK MARINES for short) and I've been planning to start new army for some time. However being a lazy and in a hurry most of the time I just haven't had time to do anything about it. Until now.

With the winter being what it is with no snow and some free time from my studies apart from my Master's thesis I have decided to finally finish an army during the spring. My plan is to field fully painted army for the high season of tournaments in Finland with Turku Fanatic, Royal Family Easter tournament etc.

With all the new armies, supplements and so on I had plenty of choices for my new army. With the Eldar and Tau being quite popular and succesful in Finnish tournament scene I decided to skip these as an obvious choices and do something different. Somehow I have never liked Nids, Orks or Necrons too much. There is nothing wrong with these but they just don't excite me enough. Also the previously mentioned marines were out of my list. With monetary reasons the metal range of Sister of Battle didn't feel good choice and their Codex doesn't really feel that special.

So this left me with IG, CSM and Deamons. IG are really cool and they have some nice builds with blobs and armoured lists. They are however recieving a new codex in near future and I don't feel like painting 100+ infantry models anyway. CSM on the other hand have quite limited amount of competive builds and even if there are some nice options for building models the cool models are not really that usable in tournament environment.

So.... Deamons it is! Actually I quite like the current Deamon Codex with multiple ways to build the list: The Flying Circus, Multiple units of fast close combat units suchs as Flesh hounds, Seekers or Screamers with supporting FMC's and troops or just masses of quite cheap troops to swamp enemy etc. And if I feel like doing some CSM or IG stuff in the future I can always ally them with my Deamons. Nice!

I actually have little experience with Deamons as I played couple of tournaments with my friends deamons. I played screamerstar and it was quite entertaining and fun to play with but little too dependent on certain Divination powers and the Grimoire working to really work for me. I admit bit more practice with the list wouldn't have hurted either.

For those tournaments I needed to paint few models(Soul Grinder, 3 Heralds on Discs) so I already have couple of models and paint scheme decided. I am planning to paint most of my deamons with same colours to make the force coherent and as I am using lots of Tzeentch units I decided to paint my models kind of pinkish/reddish/violet with some blue for armor etc. I will add these colours to deamons of other gods also on one way or other to keep up the theme. I also decided to put little bit more effort to the bases of the models as I have always neglected that part of the models. Below are some pictures with some WIP lava bases and finished test base and also some photos of my current models.

The bases: First I added some random line(s) of general-purpose glue(Erikeeper) to represent the lava. After the glue had dried I added some some around the soon-to-be lava. I painted the lava with various reds, oranges and yellows and the sand with black and 50/50 black/grey highlight. Finally I added matt varnish over the lava to give some shiny lava feeling. 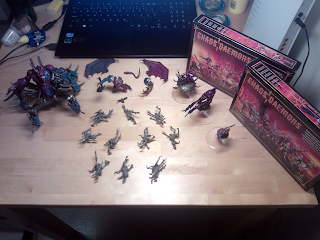 My current Deamons! Not very impressive: Soul grinder with some finishing up needed, same with the 3 heralds. Deamon prince is maybe 50% finished and the horrors... well, I have glued them. I also got some vouchers for local GW for Chrismas which helped me with my lacking Troop choices with... 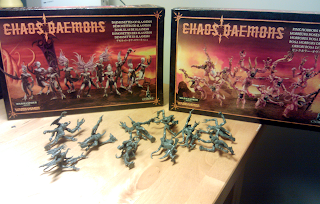 The Reinforcements! Yay! With couple units of Horrors and unit of Deamonettes I think I have quite good foundation for my deamon force. I am planning to build these during next week and hopefully paint them to tabletop level so I can begin gaming with these.

That's all this time. Hopefully I have some more pictures next time. I am also trying to plan some list to play small games with.

PS. Sorry for the picture quality, I took these with my Lumia 800 cell phone and I have even less photography experience than playing with deamons.

Welcome to my new blog!


This blog is all about getting better at WH40k. Gaming, painting etc.

I am a tournament player with no great successes. I mostly end up being below average in tournaments I participate. I am also well-known for being lazy-ass painter with my trusty BLACK MARINES dating back many years with only few models added during all years I been playing with them. And worst of it all is that I haven't even painted all of my BLACK MARINES by myself!

I might add that my gaming tends to be rather seasonal with my other hobbies, mainly snowboarding, taking most of my time during winter(if there is snow, goddammit!). Also some minor activities such as working and trying to finish my Masters decree in Forest Ecology takes some time. These tend to limit my gaming activity with my suddenly appearing lazyness so I don't get to play as many games as I should and would like to.

However, the Year 2014 will be different! This year I will finish my new army and play more games than ever!